What Are Some Real Life Spy Gadgets?

Luis Prada answered
When we watch James Bond movies we are always amazed by Q and his massive workshop of clever toys -- watches that shoot lasers, X-ray glasses, bagpipes with flamethrowers – all fun, murderous toys of secret destruction.

The crazy part of it all is that there are tons of these gadgets in real life, thanks to the CIA.

It looks like: A belt buckle
but It’s actually: A Hacksaw 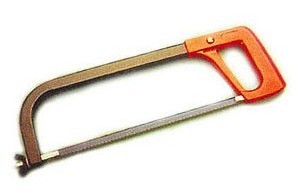 Scenario: You’re deep undercover within the enemy stronghold (which is a missile silo hidden within an active volcano), when the international terrorist that’s going to hold the world hostage asks you to perform the secret super-villain handshake. You say, “But why? We’re all bad guys here! Let’s get to some world dominating! Am I right, fellas?!” The villain just wants to be sure that you’re playing for the right team, so he insists. “Besides,” he casually mentions, “A real super-villain wouldnt’t mind giving the secret handshake at a moment’s notice.”

Begrudgingly, you attempt the handshake. You nail every slap, every high-five, every low-five, every under-the-leg fist pound – you nail everything that has to do with secret super villain handshakes. You did it. You passed the test.

But then the super villain terrorist guy informs you that there is no such thing as a secret super villain handshake, and that you’re the worst spy he’s ever seen. He arrests you and locks you away for the time being (he wants to keep you alive so you can watch his devious plot go off without a hitch). As you sit in a cell, handcuffed to a pipe, you remember that in your belt buckle is a tiny hacksaw capable of sawing through metal or concrete with relative ease. You pop open your belt buckle and you begin to thrust your hip in a sexual manner as you run the saw’s teeth against the cold chains of the cuff.

Within mere moments your hands are free and you’re ready to take on an entire legion of terrorists.  Sadly, after you make your daring escape, the terrorist gets tired of playing games and he just shoots you in the head.

It looks like: A Cigarette
but It’s actually: A .22-caliber gun 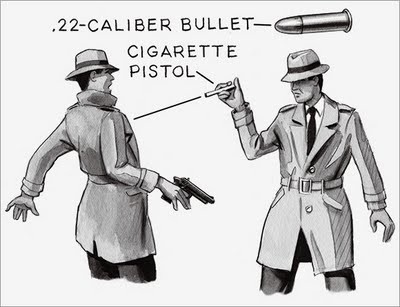 Scenario: You’re walking the streets of Moscow, following a shifty eyed member of a crime syndicate that’s funneling weapons to a larger, far more dangerous terrorist organization that’s, like, waaay more dangerous than the one from the first example. The man you’re tailing heads in to a bar, you duck in there as well.

The man, his nerves shot, panic setting in, gets himself a glass of cheap vodka. You sit down a few stools away from him. “Rough weather out there, huh?” you say. The man nods and takes a sip. In all of your infinite spy wisdom and with your extensive training in interrogation tactics you say, “Say, you wouldnt’t happen to know of any…international terrorist organizations, would you? I'm looking for a job.” As you say that, you twist the filter-end of a cigarette counterclockwise as you pretend to take a puff (oh, did I mention you’ve had a cigarette in your mouth this entire time? Well, you do), and it’s a good thing, too, because just at that moment, the shifty eyed Russian whips out a pistol that was tucked in to his belt.  Just as he’s about to open fire and spill your red, white, and blue brains all over the bar, you squeeze the filter with your forefinger and thumb. Out of the front of the cigarette shoots a bullet and it strikes the shifty-eyed Russian down.

It also strikes you down because the powerful recoil of the cigarette gun launches the thing from between your lips in to the back of your throat. Mission accomplished, but at what cost?

It looks like: Eyeglasses
but It’s actually: A Dagger 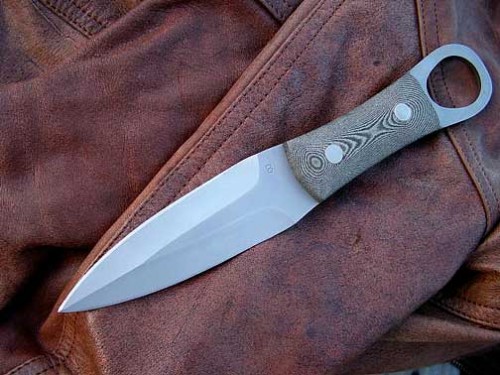 Scenario:  You’re in the New York Public Library checking the records for the types of books read by a certain man of interest; Mein Kampf, a book about Ted Kaczynski, and, most evil of all, The Joy of Cooking. As you look over the checkout record, you remind yourself how happy you are that the CIA gave you full medical coverage, which allowed you to buy the totally sweet glasses you’re wearing. A few flirtatious glances from the foxy ladies in the library lets you know that you made a wise selection in frame ware.Just as you were about to give yourself a very literal pat on the back for your fine taste in eyewear, you see the faint reflection of the man of interest you’re researching in the corner of your glasses. Just as he stabs down with the knife, you duck out of the way. You hit him in the back of the head, making him a bit dizzy. He comes roaring back with the knife, he’s quicker than you expected. You dodge a couple of slashes, side step a stab, and then give him some well placed punches. It is then that you decide to even these odds. You break off the legs of your fancy, lady attracting glasses to reveal what would be an extremely sharp dagger, but your forgot one thing: You left the dagger glasses at home because A) they aren’t very comfortable, and B) they don’t attract nearly as many foxy ladies. But, you’re a well trained CIA agent, so you stab the man of interest in the face with the leg of your now broken glasses. You Win.

But the fight caused some commotion and it made a loud ruckus. In to view comes one of the foxy ladies that were eyeing you from before. They notice the dead guy, but they’re even more concerned with your broken glasses. They offer to mend the eyeglass leg.

Then you have sex, with all of them – all 7 of them. It is awesome. You’re a spy, an awesome spy.

It Looks Like: Flour for bread dough
but It’s actually: Explosive Powder 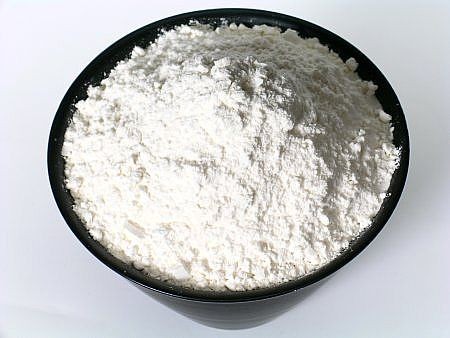 Scenario: Being a master of disguise, you have wormed your way in to the job of a bread maker in an Italian bakery. The bakery is situated near a hotbed of criminal activity, much of which has been linked to an even bigger, and waaaaaaaaay more dangerous international terrorist organization than the previously mentioned groups…COMBINED!

Your co-workers think you’re a bit of an eccentric bread maker because you like all of your bread making supplies to be splayed out before you in a very particular manner. You keep one bag of flour on the left, and another on your right. But you never use the flour on the right; you just tell everyone that it’s your lucky bag of flour -- the one that your mom gave you on her death bed. But that’s not at all what it is. It’s actually flour that can be easily converted in to a bomb, while at the same time being completely edible.

Today is a particularly hectic day in the bakery, and you don’t know why – but one thing you do know is that most of the terrorists you’re trying to hunt down have shown up in your bakery. “Must be some kind of management meeting where the crime bosses pay a visit to their smaller syndicates to make sure everything is running smoothly,” you think to yourself.

Knowing how you’ll get a sweet promotion out of it, you decide to break all that eggs that happen to be in your basket. While no one is looking, you break open the bag of flour on the right and ingest a few handfuls of it. You down a bottle of acidic accelerant, and then you wash it all down with a detonator. You rush in to the mob of mobsters and punch yourself in the stomach.

The punch mixes the flour and the accelerant, as well as setting off the detonator. You explode and take out all of the villains. As your head soars through the air, your final thought in life is, “Wait a second…I’ll never get a promotion this way.”

Hi i think this is great